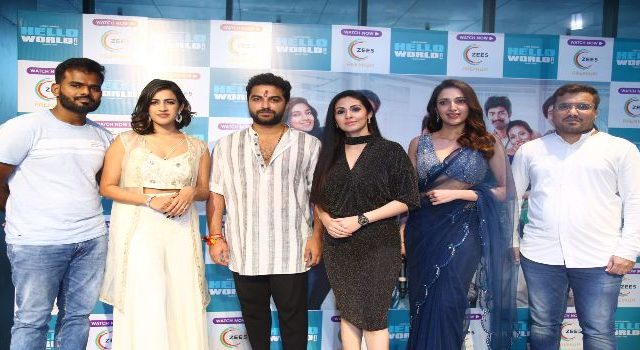 Hyderabad, 13th August 2022: ZEE5 has been relentlessly dishing out a wide variety of content in various formats in Telugu, Tamil, Kannada, Malayalam, Hindi, Marathi, Gujarathi, Bengali and other languages. ZEE5 has made a name for itself nationwide as a prominent streaming platform since its inception. The streaming giant has been streaming 'Roudram Ranam Rudhiram' to a blockbuster response. On the web series front, ZEE5 has been spectacular. After presenting the comedy-drama 'Oka Chinna Family Story' from Pink Elephant Pictures, 'Loser 2' from Annapurna Studios stable, 'Gaalivaana' from BBC Studios and NorthStar Entertainment, it most recently came out with 'Recce', 'Maa Neella Tank' and 'Paper Rocket'. As has already been made official, 'Hello World' is going to stream on the streaming platform from August 12. Its pre-release event was graced by Vishwak Sen and 'DJ Tillu' beauty Neha Shetty, who were thanked by producer Niharika Konidela for doing the honours. ZEE5 is the first-ever OTT platform to collaborate with T-Hub, the innovation project in Hyderabad. The purpose is to promote 'Hello World' among the IT crowd, who are discovering their strengths at T-Hub, the symbol of innovation and prosperity. The building facade has been used for branding. Speaking on the occasion, Niharika said that the series has been made as a romantic drama mirroring the lives of IT employees. "I hope this series furthers the good name that our banner Pink Elephant Pictures has got. The director strictly abided by the tough deadlines and gave his best. The technical team and the artists have done so well! Even those who have done small characters have delivered impactful performances. My 'Oka Chinna Family Story' maker Mahesh Uppala has been of great support. I thank the ZEE5 team for all the support." Actor and guest Vishwak Sen said that he too comes from an IT background. "I hope Niharika's attempts with the young team bear fruit. I wish the team all the best," he added. Neha Shetty, another guest, said, "I have got many friends in the IT sector. I wish Sadaa and Aryan Rajesh all the best together with the rest of the team. Sadaa said that doing the web series felt like doing a film, although it's her first web series. "Niharika has previously handled a successful series as a producer. Her production house is going strong. The director has extracted the best from us. I hope everyone enjoys this series," she added. Director Sivasai Vardhan said that producer Niharika was searching for a novel story when he went to her with the script of 'Hello World'. He also praised the entire cast and crew. "I have got many years of IT background experience in the past. I drew from the experience. 'Hello World' will be relatable to both IT and the general population. Its emotions will be relatable throughout," he added. Music director PK Dhandi said, "The songs in this series are not the regular types. I thank the director for the opportunity." Nitya Shetty, who has played Pravallika, said, "I have worked with many technicians and producers, none of them as comfortable as Pink Elephant Pictures. The team has been great throughout. I thank ZEE5, too, on this occasion." Sudharsan who has played Varun said, "I thank the director and the producer. They called me when I was in Chennai and gave the opportunity." Apoorva Rao who is seen as Varsha said, "This is my debut project. I thank the director and producer for the nice opportunity." Cast: ARYAN RAJESH as RAGAV, SADAA as PRARDHANA, RAM NITIN as SIDDARTH, NAYAN KARISHMA as MEGHANA, SUDHARSAN GOVIND as VARUN, NITYA SHETTY as PRAVALLIKA, NIKIL V SIMHA as RAHUL, APOORVA RAO as VARSHA, GEELA ANIL as SURESH, SNEHAL S KAMAT as AMRUTHA, RAVI VARMA as DEBASHISH, JAYAPRAKASH as ANAND Crew: DIRECTOR: SIVASAI VARDHAN JALADANKI, PRODUCER: NIHARIKA KONIDELA, PRODUCTION HOUSE: PINK ELEPHANT PICTURES, SCRIPT WRITER: SIVASAI VARDHAN JALADANKI, CINEMATOGRAPHER: EDUROLU RAJU, MUSIC DIRECTOR: PK DHANDI, EDITOR: PRAVEEN PUDI, PRODUCTION DESIGNER: SHIVA KUMAR MACHA, COSTUME DESIGNER: AANSHI GUPTA, EXECUTIVE PRODUCER: MANYAM RAMESH