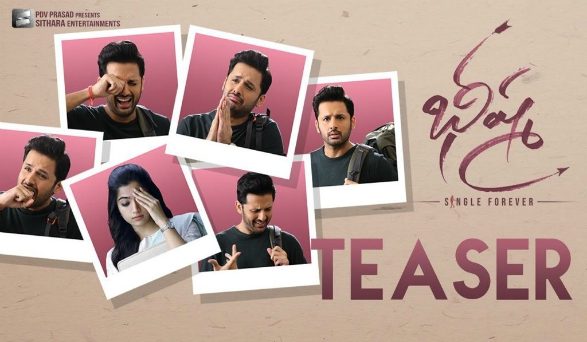 Nithiin & Rashmika Mandanna  starring  “BHEESHMA”  film  written  & directed  by  VENKY KUDUMULA , Produced  by SURYA DEVARA NAGA VAMSI  under  SITHARA  ENTERTAINMENTS  are  released  TEASER on 12TH  JANUARY 2020  . Presently  team is busy  in wrap-up of final schedule. Speaking to media, producer  SURYA DEVARA NAGA VAMSI said  ,we are releasing  our teaser which  is small  sample for our huge entertainer. Speaking to media director VENKY  said I am thankful to our handsome hero and cute heroine and  technical team  for their support in every situation. And this teaser will entertain you to core and  I hope definitely you will like it. Movie is going to hit the screens on  February 2020 .