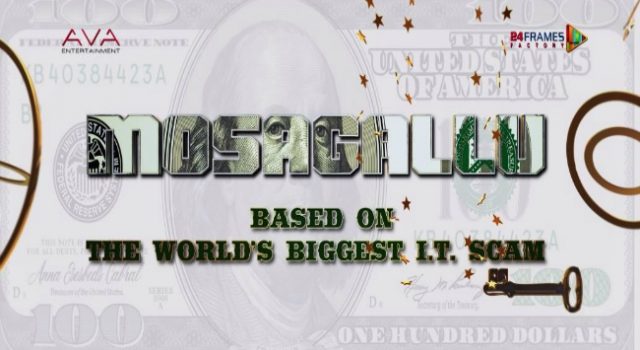 Victory Venkatesh has today unveiled The Rise Of ‘Mosagallu’- the title key theme music of the film today. Given, it’s a crossover film being made prestigiously on lavish budget; the makers are promoting the film distinctively and vigorously.

The theme music is exhilarating and gives an impression that it is going to be an edge of the seat thriller. The title is unveiled in style with the US $ 100 note is used to design it. All in all, The Rise Of ‘Mosagallu’ is inimitable and stupefying. Vishnu Manchu besides playing the lead role is also producing the film, while Jeffrey Chin is directing it. Kajal Aggarwal will be seen as Vishnu’s sister. Mosagallu is based on a true story – about the biggest IT scam in history; which originated in India and shook the United States of America. Bollywood star Suniel Shetty makes Tollywood debut with the flick. Cast: Vishnu Manchu, Kajal Aggarwal, Navdeep, Naveen Chandra, Ruhi Singh and others. Crew: Producer - Vishnu Manchu Executive Producer- VijayKumar R Director - Jeffrey Gee Chin DOP - Sheldon Chau Production Design - Kiran Kumar M