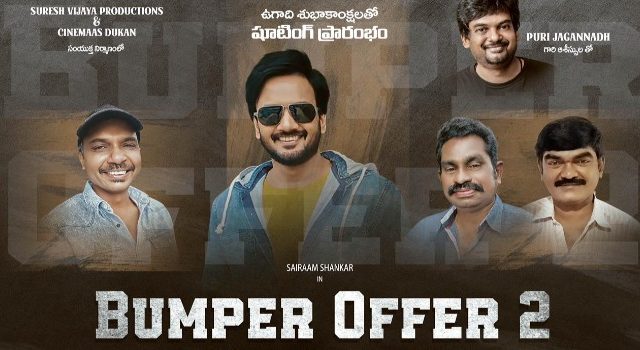 The film ‘Bumper Offer’ was a breakthrough film for hero Sai Raam Shankar. After 12 long years, the second part is ready however this is not a sequel but will be whole together a fresh subject. With the blessings of Tollywood’s leading Dashing and Daring Director Puri Jagannadh, ‘Bumper Offer 2’ is officially announced. This is going to be an out and out commercial entertainer set against the backdrop of Rayalaseema region. Jayaravindra who directed ‘Bumper Offer’ will also helm the second part while Ashoka has penned the script. The regular shooting of ‘Bumper Offer 2’ kick starts on Ugadi festival i.e, in April.Heroines and Other Technicians will be announced Soon.

Melody Brahma Mani Sharma will be composing music while Pappu will handle the cinematography. Technicians such as Kotagiri Venkateswara Rao and Varma for editing and art work are signed for the movie.

Suresh Yellamaraju is producing the movie under Suresh Vijaya Productions, and also with this film hero Sai Raam Shankar is marking his debut as producer on Cinemaas Dukan.