Please watch ‘Republic’ on ZEE5 & let us know your feedback: Sai Tej Audio to his Fans 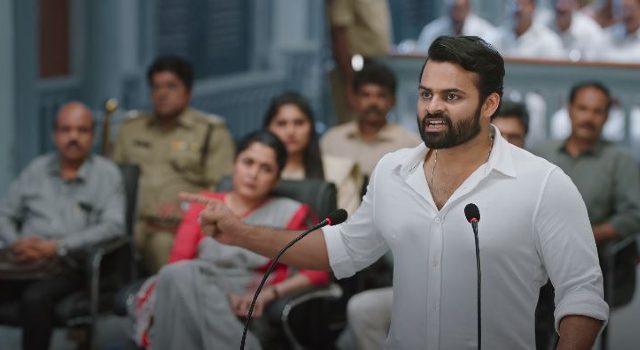 'Republic' to stream on ZEE5 from November 26

'Republic' stars Sai Tej as the hero. Directed by Deva Katta, it is produced jointly by JB Entertainments and Zee Studios. The film explores the role of government officials, the political executive, and the people in a democratic system. It will now be streamed on ZEE5 from November 26 with Deva Katta's commentary. Ahead of its streaming, the team of 'Republic' today spoke at an event in Hyderabad.

Sai Tej spoke through an audio message. He began his address by thanking his fans and well-wishers for praying for his quick recovery after the recent road accident. "I couldn't watch 'Republic' with you people. Please watch our movie on ZEE5 and let us know your valuable feedback," he added.

Jagapathi Babu said, "I missed out on doing 'Prasthanam' and 'Autonagar Surya' with Deva Katta. And I am proud to have acted in 'Republic', a film we all Indians should be proud of. It's a bold step to release the movie on OTT with the director's commentary. It shows the director's confidence in his product. It takes a lot of boldness to make a film like this one. Sai Tej is great to have accepted to do such a subject. Deva has done an extraordinary job. After watching the movie, I feared that the audience may not give it the response it deserves, considering that they like to watch mostly meaningless stuff. But, to be honest, the response was encouraging. I am confident that 'Republic' will become a hit on OTT." Jagapathi Babu also mentioned the main cast and crew members in his speech.

Director Deva Katta said, "I thank ZEE5 for promoting our movie in a big way. Without ZEE, my vision wouldn't have got support. 'Prasthanam' gave me an identity. After that movie, I was in a state of confusion. I made 'Republic' to give a voice to our thoughts. I and Tej were intent on respecting the audience. And we received respect in return. We are very proud. 'Rudra Veena' is a landmark film in Chiranjeevi garu's career. I want 'Republic' to attain that status. I comprehensively analyzed the political system to do the movie. I and my team have done a detailed analysis of 'Republic' to help the audience understand every scene, dialogue and shot. On ZEE5, our movie will stream as two versions. One is just the movie. The other one will be with the director's commentary. If you select the second option, you will listen to our voice."

Talking about Sai Tej, Deva Katta said, "I happened to narrate a story to Tej after the release of 'Supreme'. It was a mass masala flick. Another story was in the backdrop of sports. He didn't do it because he was already doing 'Winner' by then. He is like my brother. He is an emotional and honest person. Before I narrated 'Republic', I told Tej that we are not living in a real democracy. I was apprehensive about whether he will accept the climax. But after listening to it, he asked me not to change the climax. When actors were avoiding me after I delivered flops, he was stubborn about working with me. When I used to work on the dialogues of 'Baahubali', Tej would spend time with me at my place. A lot of credit for 'Republic' goes to him."