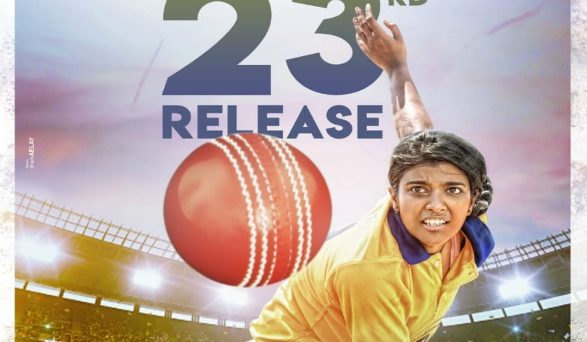 Our 'Kausalya Krishnamurthy' Which Is Releasing Worldwide On August 23 Will Impress Everyone - Creative Producer KS Rama Rao Aishwarya Rajesh, Natakireeti Dr. Rajendraprasad, Karthik Raju, Vennela Kishore starrer 'Kausalya Krishnamurthy' - The Cricketer is gearing up for its release worldwide on August 23rd. Directed by popular director Bheemaneni Srinivasa Rao, 'Kausalya Krishnamurthy' is Presented by creative producer KS Rama Rao as Production No 47 in Creative Commercials banner, Produced by KA Vallabha. Popular Tamil hero Siva Kartikeyan did a crucial role in the film. On this occasion team spoke with media on August 14th at FNCC, Hyderabad. Creative Producer KS Rama Rao said, " In all sports-based films those were made recently men played the lead roles. Aishwarya Rajesh, though she is a Telugu girl has acted for the first time in Telugu and she has given a splendid performance in 'Kausalya Krishnamurthy'. In spite of the completion of all works, as the film has been made with a noble concept we opted for a big release on August 23rd as per our distributor's advice to have a wide reach among the audiences. Aishwarya Rajesh did 20 films in Tamil. She also acted in Malayalam and Hindi films. She has won many accolades at the national level as a good performer and is now getting introduced in Telugu with our film. She is the granddaughter of senior actor Amarnath Garu and daughter of actor Rajesh. I was stunned when I watched the film in Tamil. She shouldered the entire film for two and a half hours. Though the film was released amidst 5 big films, It emerged successful with audiences verdict because of its strong content. Even today, I wonder to see the actors and technicians who worked for the film are being felicitated for their work. The song crooned by Siva Kartikeyan's daughter has clocked 130 million views. It became a very good hit in Telugu too." He also said, " This film has created a sensation in Tamil and I wanted to present it to the Telugu audiences. I also wanted to introduce the Telugu girl who made a good name for her in Tamil to Telugu films. So I have bought the remake rights of the film. We wanted Bheemaneni Garu to direct such a good film as he can do complete justice to the content. I appreciate him for his dedication and the care he took to make this film flawless is commendable. Hanuman Chowdary being a new young writer has penned superb dialogues for the film. Everyone will talk about him after the movie's release. We are planning a grand Pre-release event on August 18th. A special screening of the film will be held on Aug 22nd for the Media who are giving their valuable support for us. I hope you all will make the film a grand success." Producer KA Vallabha said, " This film which has been made with cricket backdrop will strike a chord with everyone. This film was a big hit in Tamil. We are confident that it will become even bigger success in Telugu." Director Bheemaneni Srinivasa Rao said, " Publicity and Promotions of the film will kick start from tomorrow. The teaser which was released recently gathers a very good response. Songs are trending in social media with millions of views. These indicate the amount of positive buzz the film has among the audiences. Like our Producer, KS Rama Rao Garu said, 'Kausalya Krishnamurthy' is a very good film and will surely score a big success. The output of the film came out very well. My family members have watched the film and appreciated our unit. The film came out rich on the technical front too. Though this is a remake, we have put in a lot of effort even more than a straight film. Producer Rama Rao Garu has provided very good artists and technicians. He is changing with times and making films according to the current generation. Our entire team worked with the utmost dedication for this film. We are coming before you all on August 23rd. We need all of your support. I believe you will love this film." Dialogue Writer Hanuman Chowdary said, " First of all I would like to thank my producer KS Rama Rao Garu for this opportunity to work for such a good film. I have worked with Director Bheemaneni Garu for his 'Sudigaadu' film. After KGF I have written dialogues for this film. This film has a beautiful story. It will bring us fame." Cast: Aishwarya Rajesh, Natakireeti Rjendraprasad, Siva Karthikeyan (Special Role), Karthik Raju, Jhansi, CVL Narasimha Rao, Vennela Kishore, 'Rangasthalam' Mahesh, Vishnu (Taxiwala fame), Raviprakash and others. Crew: Cinematography: I Andrew, Editing: Kotagiri Venkateswara Rao, Music: Dhibu Ninan Thomas, Story: Arunraja Kamaraj, Dialogues: Hanuman Chowdary, Lyrics: Ramajogayya Sastry, Krishnakanth (KK), Kasarla Shyam, Rambabu Gosala, Fights: Dragon Prakash, Dance: Shekhar, Bhanu, Art: S Sivayya, Co-Director: B Subba Rao, Production Controller: BV Subba Rao, Executive Producer: A Sunil Kumar, Line Producer: V Mohan Rao, Presented By KS Rama Rao, Producer: KA Vallabha, Directed By Bheemaneni Srinivasa Rao