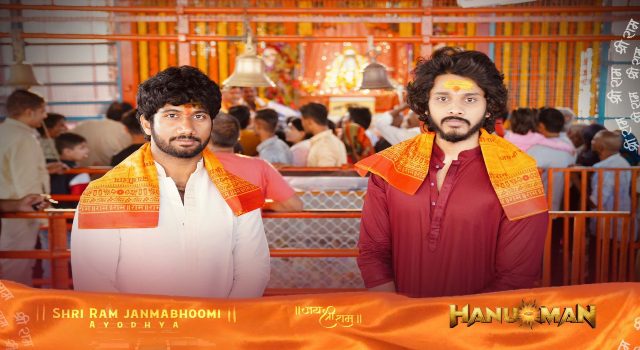 Creative director Prasanth Varma is coming up with the first original Indian superhero film Hanu-Man which features Teja Sajja playing the titular role. It is the first film from Prasanth Varma Cinematic Universe. The crazy Pan India film’s teaser was unveiled a few days ago and the response to the same is exceptional. The teaser made the entire country chant Hanuman.

Yesterday, the team Hanu-Man including director Prashanth Varma and hero Teja Sajja visited Ayodhya Temple to seek the blessings of Lord Sriram. The team is in ecstasy with the response to the teaser and they go on a spiritual journey to begin the promotional campaign.

Amritha Aiyer played the leading lady. The film is produced prestigiously on a grand scale by K Niranjan Reddy on PrimeShow Entertainment, while Smt Chaitanya presents it. Asrin Reddy is the executive producer, Venkat Kumar Jetty is the Line Producer and Kushal Reddy is the associate producer.

The cinematography for this magnum opus is by Shivendra, wherein the music is scored by the young and talented trio Gowrahari, Anudeep Dev and Krishna Saurabh. Srinagendhra Tangala is the production designer.

HANU-MAN is presently in the post-production stages and the makers will soon announce the release date.